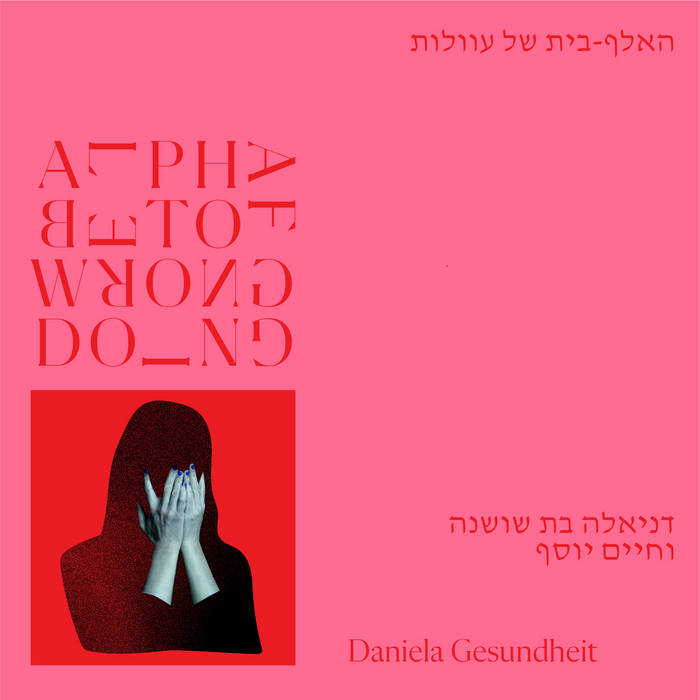 In 2016, Toronto songwriter Jennifer Castle wrote me an hour before her show at Night Gallery in LA inviting me to sing a couple of a cappella prayers to “clear the space” before her set. It was the first time I sang Jewish ceremonial prayers outside of a ritual context. I chose the heavy liturgy from the holiest days on the Jewish calendar — the Lunar New Year, Rosh Hashanah, and the Day of Atonement, Yom Kippur.

Alphabet of Wrongdoing was set in motion that night — ceremonial Jewish prayers and blessings encircling themes of reckoning, forgiveness, mortality, striving, and atonement reimagined for secular audiences and secular spaces. Both the album and the performance investigate communal gestures of forgiveness and offer inroads to dignity through song.

The title of the project comes from the prayer Ashamnu, or “Alphabet of Wrongdoing.” In a ritual context, a congregation would stand and recite in alphabetical order all of the ways they may have missed the mark in the past year, beating their chests with each admittance: hardening our hearts, dismissing serious matters with a joke, oppressing another. Even if one has not committed the confessed acts, the person next to her may have. And so, to hear these acts uttered aloud in community might help someone see how they may have harmed another. This communal act of forgiveness is a form of chesbon ha’nefesh — or spiritual accounting. We sing the words aloud because, as Anne Carson writes, “Words that are written . . . may fold away and disappear. Only the spoken word is not sealed, folded, occult or undemocratic.”

This music is for challenging junctures, when we have more questions than answers. To make an album of reimagined Jewish liturgy is my way of saying we can re-work, but we cannot obliterate; matter just does not behave that way.

It has been an honor, a joy, and, at times, a tussle to exhume the beauty and poetry out of such a long-standing and imposing tradition as the Jewish High Holiday liturgy. I had many stare-downs and duels with both my tradition and my fear in the making of this record. I had dreams of tidal waves enveloping me, of myself as a male Hassidic rabbi, intoning ancient prayers alone in forgotten empty synagogues. This material is the tongue of the bell that is my entirety — when I sing these songs and prayers, every sleeping corner of me awakens, and I, as Marilynn Robinson once wrote,“participate in being without remainder.”

It is my hope that the music greets you with resonance and respect, that it can be a source of clarity in these increasingly unnerving times, and that your whole self can stand before these songs and say “Hineni“ — here I am.

PART I : Who by Fire

PART II : Forgive Us, Pardon Us

PART III : Goodness Will Pursue Me

When I was twelve I visited Žasliai, Lithuania with my grandmother and family. It was her first time returning since she fled to Mexico just before WWII as a teenager. We visited the mass grave where her father, sister, and her sister's family were likely shot and killed. I remember her walking very softly, tentatively, as though she was trying not to wake the people beneath her. It was an unmarked clearing in a forest overgrown with yellow rue wildflowers — the national herb of Lithuania which symbolizes virtue, good health, and longevity. Rue is edible in trace amounts, but poisonous if consumed liberally. Family is a circuitry for empathy.

Alphabet of Wrongdoing is dedicated to All Our Departed — to my beloved Grandparents Bernie Shapiro, Fanny and Abraham Gesundheit; to my brother Avi Gesundheit; to my ancestors who perished in mass graves in Poland, Lithuania, Russia; to the people in my life who have passed away or with whom I have had to sever ties; to Missing and Murdered Indigenous Women; to Black Victims of Police Brutality; to victims of genocide, human trafficking, drug cartel violence, white supremacy, queer and trans violence, and the Israeli-Palestinian conflict; to all beings whose habitats or bodies are being destroyed by our carelessness, may their memories be blessings and may we find another way. z”l

“On this day, heat and warmth and light must come from deep within ourselves; no longer can we tear apart the world to make our fire.” — Rabbi Richard N. Levy

The melodies and texts herein are traditional, though the vocal embellishments and ornamentation are original. Many of the selections on this album adhere to a form of a refrain that has a set, congregational melody, and that alternates with verses that are improvised within the nusach or mode of the piece. The verses in these pieces are improvised.

The instrumental arrangements and production are original. Many of the pieces were re-harmonized by Dan Misha Goldman. Track twelve, Mi Chamocha, features a melody written by Rabbi Hanna Tiferet Siegel.  www.HannaTiferet.com

Recorded by Dan Misha Goldman in Montréal, Leon Taheny at Boombox studio in Toronto, Nicolas
Pétrowski at Mixart in Montréal, and Daniela Gesundheit in Los Angeles

Artwork, typography, and layout by Brankica Harvey and Ken Deegan

Fonts Flecha and Grifo designed by Rui Abreu of R-Typography

Booklet photographs by Caitlin Woelfle-O’Brien. The images are stills from a video for All Our Departed, directed by Johnny Spence, choreographed by Erin Poole, featuring Erin Poole and Eric Cheng.

All included Hebrew texts are traditional, and edited by Dana Reginiano; all English translations and English translation excerpts are by Rabbi Richard N. Levy z”l, from his volume of High Holiday liturgy, On Wings of Awe, courtesy of B’nai Brith Hillel Foundations. All other English passages are by Daniela Gesundheit, edited by Kristen Bulger.

This album was recorded on the traditional territories of Mississaugas of the Credit, the Anishnabeg, the Chippewa, the Haudenosaunee, and the Wendat people, and on the unceded lands of The Kanien’kehá:ka Nation and the Gabrielino/Tongva people.

Alphabet of Wrongdoing was recorded with the assistance of a Canada Council for the Arts Concept to Realization Grant.

Many, many friends, colleagues, family members, and organizations have been unshakeable in their support or inspiration during the making of this work —

Johnny Spence - for rolling your sleeves allllll the way up, and for your talent, friendship, heart, and humor.
Dan Misha Goldman - for laying the foundation time and again, and for your perennial support.
Alex Lukashevsky - for listening with thousand-year-old ears, singing like an enlightened dust storm, being a one-man minyan.
Basia Bulat - for your tears of resonance and recognition, and for your unending exuberance and generosity.
Sari and Romy Lightman - for Priestessing the mundane moments, and re-wilding the now.
Owen Pallett - for your direct line to the muse, and for wrestling the angels down to Macedonia for a lowly string session.
Sarah Pagé, Evan Cartwright, Jason Sharp, and Phil Melanson - for being the musical equivalent of that temperature of air that feels like a continuation of skin.
Horses Atelier, especially Tala Kamea, Mickelli Orbe, Claudia Dey, and Heidi Sopinka - for perpetual crush and inspiration, and for outfitting me with my Jewish Wonder Woman suit.
David Travers-Smith - for your high beams.
Steve Kaye and Sunking Studios - for your p a t i e n c e and your vibey bat-ears.
Leon Taheny at Boombox, and Nicolas Pétrowski at Mixart - for metal detecting the ether.
Terri Loewenthal - for calling in the Good Witches of Good Angles every time, and for your mastery of fun.
Erin Poole - for summoning the underworld with grace.
Caitlin Woelfle-O’Brien - for a grainy, flattering lens that revealed a small, new cosmos.
Mary Rozzi and The September Issues - for offering me creative carte blanche, and being there to see it through.
Casey Kauffmann - for our Jewish Valleygirl synchronicity and your perfectly subversive Mattel sensibilities.
Brankica Harvey and Ken Deegan - for getting it, for getting it right, for putting a face to the name.
Kristen Bulger - for your raking light, your ability to reveal process and beauty legibly.
Dana Reginiano - for your eleventh-hour mastery of ivrit.
Dawn Garcia - for conjuring and capturing the iconography of atonement before I knew I was looking for it.
David Wilson - for always creating space.
Jennifer Castle - for asking me to.
Pete Min - for sharing gear with abandon.
Tabassum Siddiqui and The Globe and Mail - for good questions, thoughtful questions, and for your soft power.
Elina Gitig and NuRoots - for being a bullhorn to the whisper of this project’s beginnings.
Canada Council for the Arts - for delivering the dream.
Dr. Rabbi Aviva Goldberg and Congregation Shir Libeynu - for trusting a young Californian and sharing the bimah with me all of these years.
Rabbi Mordecai Finley - for arrowheads of clarity, connecting the sephirotic dots, and telling my fourteen-year-old self to write down my dreams.
Julie Batz - for unearthing and re-animating Jewish liturgy for me, then and now.
Rabbi Richard N. Levy z”l - for crafting translations of the liturgy that resonated truly.
Peter Cole - for digging a well of knowledge and observation so deep and true that it has taken me decades to bring its water to the surface.
Donna Pall - for enduring my repetition, and returning revelation in its stead.
Anita Strassner - for seeing my long, wise white rabbi’s beard.
Michael B. Lehrer and Benjamin Lehrer - for translation (of the word and the heart) and for the rabbi-in-you that recognized the rabbi-in-me.
Megan James and Cecil Frena - for feasts, for optimism, for authenticity, for steam, but never hot air.
Martha Wainwright and Ursa - for a night of music that asked “who is the life of life?”
Maya Inglis and WAXMAYA - for illumination, kindness, and collaboration.
Kathryn Crim - for inspired interpretation and steadfast encouragement.
Leslie Feist and Ariel Engle - for being my coven, my braid, my strength in song.
Rebecca Lehrer and The Mashup Americans - for keeping me unafraid.
Frances Jacobus-Parker - for exact understanding.
Orly Szerman - for seeing the unseeable.
Renny Shapiro - for your tenacity and love.
Susie and Jaime Gesundheit - for showing me who I am and who I could become.
My dear friends and family - for keeping me fluent in love and humor.
Eric Cheng - for being a warm ocean with waist-high gentle waves, always, and for listening so many times in so many ways.

Daniela Gesundheit is a vocalist, composer, and cantor who lives in LA and haunts Toronto. As Snowblink, Gesundheit writes non-denominational devotional pop music and has released three critically acclaimed albums.

"Daniela’s voice is like clear glass that she frames a kind of playful, velvet privacy with. The sounds are sparse but so rich and carefully wild." Leslie Feist ... more

Bandcamp Daily  your guide to the world of Bandcamp

Serena Cherry debuts her black metal project, plus a Pick from the Crypt block from Svalbard